The Phoenix Chronicles are three tales of adventure that involve sailing, pirates, buried treasure and shipwrecks. Aimed at those of primary-school age, but enjoyed by those of all ages, these stories will have you engrossed from the first page to the last. As a bonus, all three also come as a Boxed Set.

To purchase any of the stories, simply click on the icon under the blurb to buy either as an eBook or as a print copy that you can hold in your hands.

When Tony challenged K to cross the mud, he was only hoping to win a bet. There was no way that they or Tom, BJ or Dana could have known that there was something buried there. Whatever it was, it let K walk across mud that he should have been buried in. And when their curiosity becomes too much, the pact to discover what’s buried in the mud plunges the five of them into the adventure of a lifetime.

Kettlan’s Box, once owned by the pirate Jimmy Kettlan. It’s guarded its secrets well. For nearly a year since being discovered by Tony, Dana, Tom, BJ and K, it’s stayed firmly sealed. When at last the box gives up its secrets, including an old map of Buccaneer’s Bay, the five friends are thrust into their next adventure. Can they compete in a race for buried treasure against a modern-day pirate? 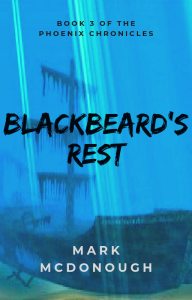 Blackbeard. One of the most notorious pirates that ever roamed the seas. And also the name etched onto the bell that Tony, Dana, Tom, BJ and K found hidden inside Kettlan’s Box. When the funding for the Buck’s Bay Library’s new museum is cut, the old ship’s bell may just hold the key to ensuring that the project goes ahead. Assuming, of course, that they can discover its hidden secrets.

Buy all three books in the one volume for the price of two!